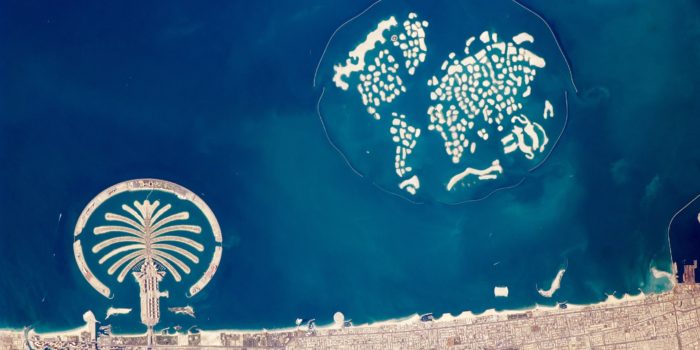 Islands contain some metaphysical things. Once these islands were taken in spiritual ways.  Nowadays, science has so much advanced. Science has become so advanced that man can make artificial islands. Some of these islands are described below:

This Island was developed by ruler of Dubai, Sheikh Muhammad bin Rashid al Maktoum. The world Island is located in Persian Gulf in Dubai. This peninsula is made up of small Islands which is constructed in the shape of world. It is about 100 meters apart.  It includes sand which is brought up to coastal water of Dubai.

This unnatural island is located in the coast of Dubai. It was built by a company named “Nakheel” that is owned by UAE government and this company used land reclamation in order to built this Island. It is shaped like palm tree and it’s a set of 3 islands and other two Islands are incomplete and they are being extended into Persian Gulf. This is a small Island located in biggest city of France, Paris. It is formed in 1827. This Island is formed to protect the port of Grenelle and there is tree lined walkway and three bridges crossing it. This Island is 850 meters long and 11 meters wide. There is a public work out space close to the statue of the liberty replica.

This Island is unnatural and located in Persian Gulf. This project offers 100% free ownership in Bahrain. A perfect place for residential purpose as it has facilities of complete infrastructure, marina, hotels commercial and residential buildings as well.

A set of four unnatural Islands that is located in San Pedro Bay off the coast of Long Beach, California. This island is formed in 1965 in order to tap into the Wilmington oil field. These are the only decorated oil islands all over the US. It contains landscaping and sound walls that are designed to reduce noise.

A small unnatural Island that is located in Danish component of Oresund. It was created as a part of Oresund Bridge that joins Denmark and Sweden. The purpose of this Island is to have a join point between tunnel and bridge. Biologists maintain its ecology annually.

An Island that is located in Mexico. It was formed in 1998. It was created using too many plastic bottles but sadly in 2005, it was demolished by Hurricane Emily. Then he started reconstructing Better Island and after 3 years, in 2008, an Island was replaced and its name is Joyxee.

This Island is made up of reed that grows in Lake Titicaca, Puno. These islands have few reed houses (made by the Madan people) that depend upon size. But some issues arise, most important issue is environment and health issue and tourists are disturbing their cultures.

It is an unnatural Island that is located in the north of Kimberley. It’s in the shape of giant ‘S’. Since construction of an unnatural island by Ekapa Mining with 26000 tons of bits and pieces, the dam become a major breeding site for lesser flamingos but island is in danger as water is rising and quality is poor.

This Island is biggest island in the country that is located in India. In the state of Kerala, it forms the part of the city of Kochi. This Island is surrounded by beautiful backwaters. It is the site of city’s best trading centres and hotels.  It is constructed around a natural Island by filling in dredged soil.

This is located in japan that is internationally famous park. It is the first Disney Park that is built outside US. It has 5 hotels and 4 airports. It is among the biggest tourists’ spots.

This is located in Maldives, between Kaafu Atoll’s Giraavaru and Gulhifalhu.  It was built in 1992 and grows at a rate of 0.92 square meters a day but it has attracted entrepreneurs.

These are one of the best islands and certainly you would love to visit these parts of the world again in your life.