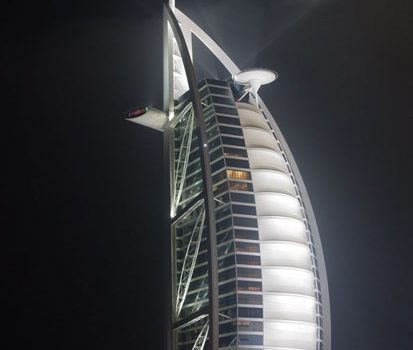 Burj Al-Arab is one of the best luxury hotels in the world. It is located in Dubai, United Arab Emirates. It was world only seven star hotel from 1999 to 2008.  The height of the hotel is about 321 meters (1,053 ft) and it is considered as the 4th tallest hotel. The hotel is situated in artificial island and it is connected to land by curving bridge.  The construction of this island started in the year 1994. Burj-al-Arab is the design architect by Tom Wright. The Canadian engineer Ricky Gregory has designed and construct.

As you know that it is constructed on artificial Island, the complex structure of the hotel, to give perfect foundation, the builders of the building drove 40 meter long piles in sand.  The hotel is being managed by the Jumeirah group.  The hotel is having 202 rooms and 28 double story floors despite having such a massive size.  It is used as purely hotel and that is why it is ranked world forth tallest building.

The architects of the hotels said, the owner told to build a structure that will become famous all over the world like Eiffel tower of Paris, Big pen of London and Opera house of Sydney.  It is the icon of modern Dubai.  There are a lot of things this hotel offer you from Gym to helipad, library to bedroom, restaurants to snooker room, in short you can enjoy luxurious stay in the hotel.  The cost of royal suit is about US $ 18,716 per night.