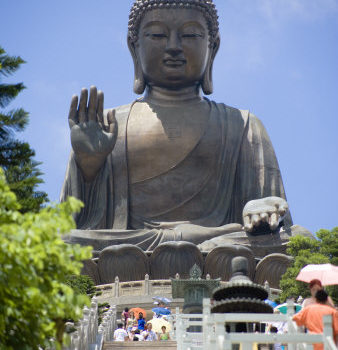 The Tian Tan Buddha is also famous as big Buddha and it is a bronze statue that is located in Ngong Ping Lantau Island in Hong Kong. It is completed in the year 1993.  It represents the lord Gautama and it is about 23 m in height.  It is among the five biggest statues in this part of the world. The statue is surrounded by six other statues called six devas as they are posed to offering the flowers, lamp, fruit and music to the Buddha.  It is considered as the sign or icon of harmony, morality, zeal, wisdom and patience. The Buddha is about 34 m tall and the weight of the statue is about 250 metric tons. Before the 2000, it was the world largest outdoor statue in the world. This is a holy place for the Buddhist people and a lot of accommodation is given to normal as well as handicap people. The work of this statue is being started in the year 1990 and it was completed on December 1993. The statue was made with 202 different pieces of bronze. When the statue was completed, the monks all over the world were invited in opening ceremony. People from China, Japan, Korea, India, Taiwan, Malaysia, Siri Lanka and USA all come to take part in the proceeding of it. Visitors can reach this place by taking taxi or bus but they have to travel to Mui WO first and then through ferry they can reach this island where it is situated.